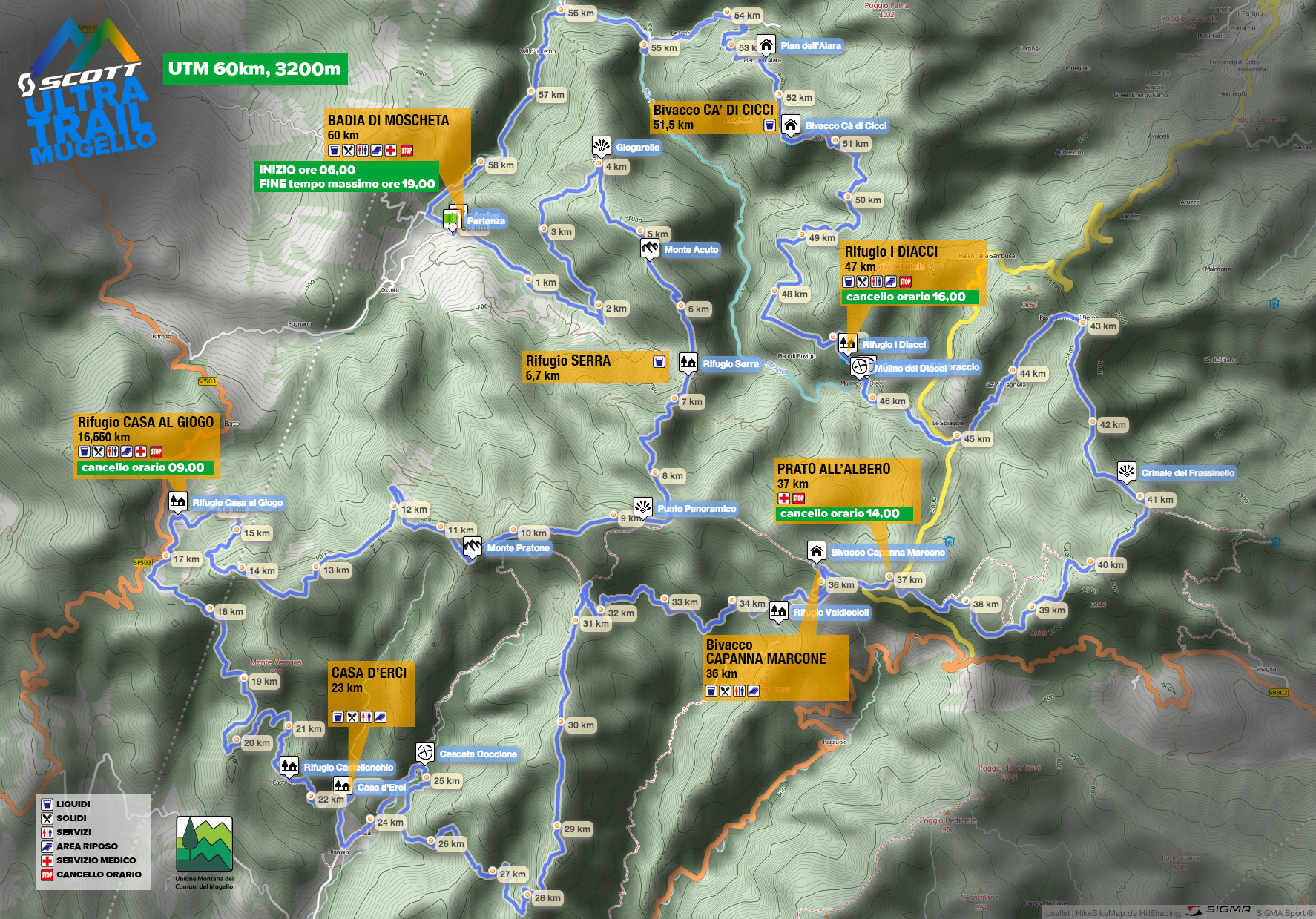 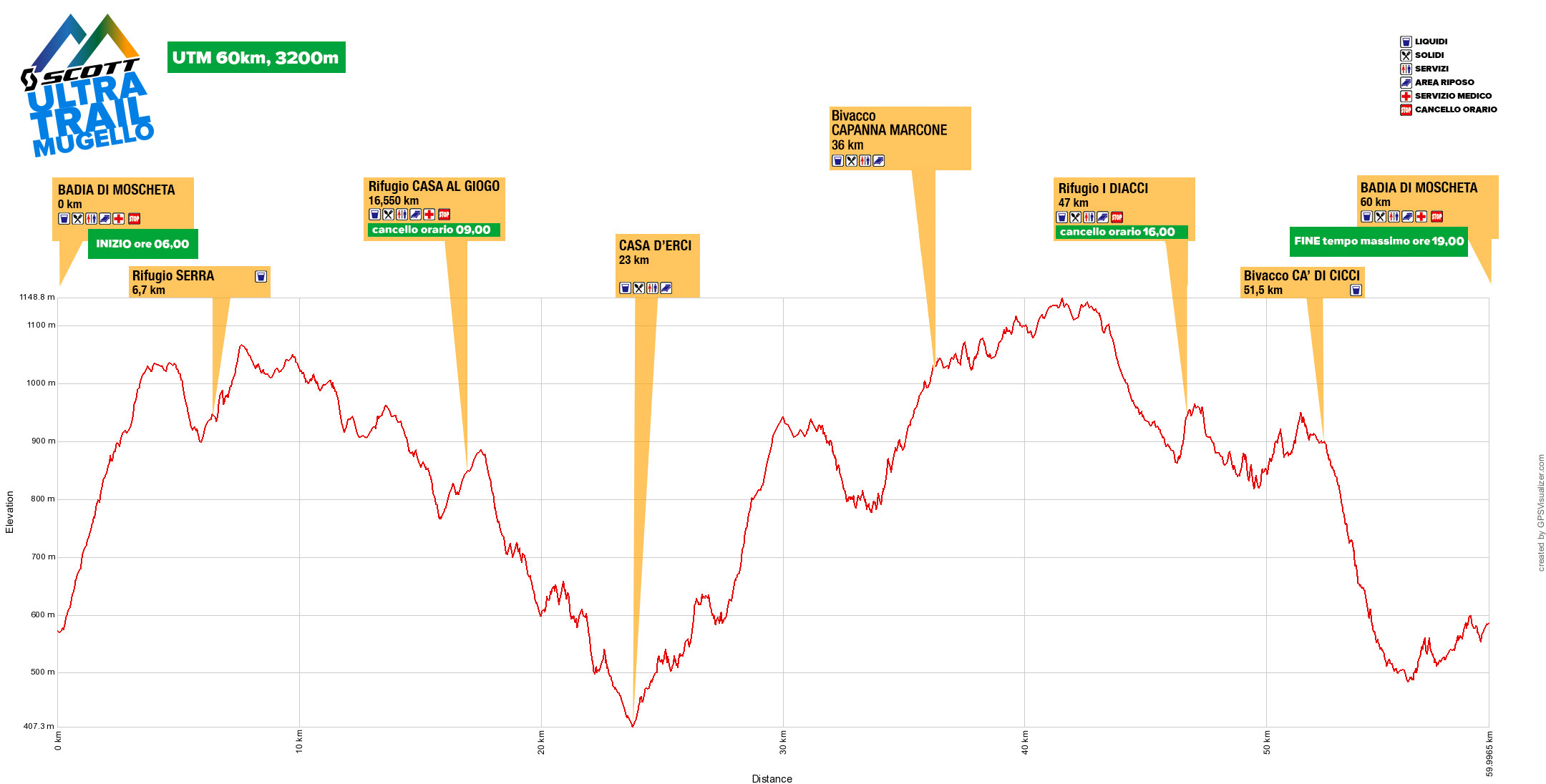 Located in one of the most beautiful parts of our district, the starting line will be at the Baddia di Moscheta.
The race begins with a climb of about 3.5 km, located in beautiful forests surrounding the ancient Baddia. Once you reach the quaint hamlet of Giogarello, you’ll traverse a beautiful ridge that leads you to the Monte Acuto 1055m. From this sunning panorama you’ll descend 1.5 km and pass the Serra Shelter, the first of seven shelters on the racecourse. This is also the location of the junction between the UTM and MT racecourses.

The Ultra Trail del Mugello continues climbing the ridgeline of the Apennine watershed, passing sections that alternate between breathtaking panoramic views and old growth forests. Here you arrive on Mount Pratone, one of the most stunning sections of the race, soon to descend down along the ridgeline and through beautiful mountain meadows. Soon after you pass the Casa Al Giogo shelter. In this mountain pass, beautiful views are further enriched by important historical significance. Here you’ll see traces of the Gothic Line, where the German forces dug in creating a defensive line hoping to slow the advance of the allied army during their retreat from the Second World War.

At this point, you begin a long single-track descent, passing the Castelonchio Shelter, to arrive at the ancient settlement of Case Risolaia. This hamlet hosts a visitor center, with an exhibition displaying the traditional arts of the local populace and a bread-making exhibition. After a 6km climb, which requires crossing the ford of a stream near the beautiful Doccione waterfall, you began a long scenic stretch, eventually diving back into mountain woods on a beautiful single-track This leads you to the Valdiccioli Shelter. Here you climb again, until you reach the bivouac Capanna Marcone. At this point you’re passing from the slopes of the Mugellano to the upper Mugello, crossing the headwaters of the Rovigo. The next section is really impressive as you alternate between beech tree forests and meadows with wonderful views. You’ll descend towards the Rovigo creek, continuously crossing streams and beech forests, finally passing through the Molino dei Diacci where you reconnect with the MT (23.5 km) route.

Here the landscape changes, with the terrain becoming more rugged and rocky. Nestled in these unique rock formations is an enchanting waterfall called Dell’Abbraccio (“The Embrace”), through which the athletes must pass. Then you climb again a little more that a half kilometer, to arrive at the I Diacci Shelter. Leaving it behind, you’ll take a path which contours the mountain with a beautiful series of ups and downs, and eventually leads you to the Val Cavaliera (“Knight’s Valley”). This just might be the wildest stretch of the Central Apennines. High on the valley walls are breeding nests of the rare golden eagle. The route passes near the bivouac of Ca Di Cicci, passes the abandoned village of Pian dell'Aiara, and descends towards the Rovigo river valley, where participants will carefully wade across to enter the Valle dell’Inferno (“Hell’s Valley”). At this point, you are almost at the finish, but you can’t lose concentration. This charming single track is insidious because it almost always wet, with slick rock surfaces on a considerable cliff overhaning the valley. Once you leave the Valle dell’Inferno, just 500 meter separate you from the finish line at the ancient Badia from which you started.

Keep in touch and stay updated about Ultra Trail Mugello